Animals are such a fun subject to study for science at almost any age.  They are especially great in the early elementary school years because children are often really interested in animals at that age and animal science is easily explained to younger children.

The topic of animals is also easily linked to literature studies.  Below is a list of 14 Magic Tree House books that go well with a science study of animals and biomes.  Many of them have non-fiction Fact Trackers that accompany them, which teach lots of facts about animals.  They are arranged in historic order and then by continent.  If a specific biome is a large part of the story, it is noted.  At the end are a FREE set of notebooking pages you can download and use with these books or with other books about animals. 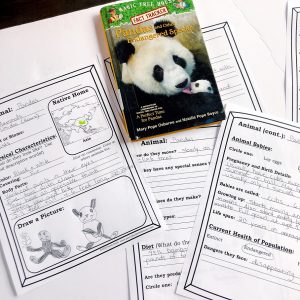 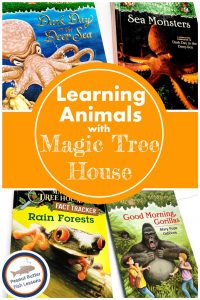 Dinosaurs Before Dark (MTH 1): This is the book that started it all!  Jack, Annie and the Magic Tree House are introduced in this book and they travel to prehistoric times to learn about dinosaurs.
Fact Tracker: Dinosaurs: Learn about a variety of dinosaurs and which ones were herbivores and carnivores. The book discusses how dinosaur fossils are studied and theories about what happened to the dinosaurs.

Sunset of the Sabertooth (MTH 7): Annie and Jack go back to the Ice Age and learn about woolly mammoths, saber-toothed tigers and cave people.
Fact Tracker: Sabertooths and the Ice Age: Details of the Ice Age are shared including a variety of animals that lived then.  Check out the Ice Age FREE Unit Study that can be used with these books!

Desert: Season of the Sandstorms (MM: 6): Jack and Annie travel back in time to a desert in the Middle East and learn about Bedouins and sandstorms.
Fact Tracker: none at this time.

A Crazy Day with Cobras (MM: 17): Annie and Jack travel back to the early 1600s in India.  They learn a lot about the history of the Mogul Empire, but they also learn about cobras and other animals in that area.
Fact Tracker: Snakes and Other Reptiles: This book dives deep into all sorts of reptile facts.

Mountains: Sunlight on the Snow Leopard (MTH 36): Hike through the Himalayan Mountains and learn about the animals that live there.
Fact Tracker: Snow Leopards and Other Wildcats: Learn about tigers, lions, leopards, jaguars and more!

A Perfect Time for Pandas (MM 20): Not only do Jack and Annie travel to China and learn about pandas, but they also experience an earthquake while they are there.
Fact Tracker: Pandas and Other Endangered Species: Learn many details about pandas as well as other animals that are endangered.  Jane Goodall and George Schaller’s work to help endangered species is also highlighted.

Animals and Biomes in the Americas

The Ocean Biome and Animals

Ocean: Shadow of the Shark (MM 25): Annie and Jack meet a shark off the coast of Mexico.  We have a FREE Shark Attacks Unit Study you can use with this book!
Fact Tracker: Sharks and Other Predators: Learn about sharks and predators in the cat and dog family.  There is also a chapter about apex predators or those at the top of a food chain.

Ocean: Dark Day in the Deep Sea (MM 11):  Annie and Jack travel to a small island in the middle of the ocean and are rescued by the research vessel, the HMS Challenger.  The setting is the late 1800s and the researchers are looking for a sea monster!
Fact Tracker: Sea Monsters: Shares information about exploring oceans and the variety of animals that live there.  Includes chapters about the deep sea, the prehistoric ocean, and tales about sea monsters.

Ocean: Dolphins at Daybreak (MTH 9): Annie and Jack visit a coral reef, drive a mini-sub and meet an octopus, shark, and some dolphins!
Fact Tracker: Dolphins and Sharks: This book includes many facts about oceans in general as well as details about dolphins and sharks.

Arctic and Antarctic Biome and Animals

Tundra: Narwhals on a Sunny Night (MTH 33): Visit the Arctic again with Jack and Annie and learn about Narwhals, a sea mammal with a large tusk.
Fact Tracker: Narwhals and Other Whales: Learn more about Narwhals and a variety of whales that live in the Artic.

Tundra: Eve of the Emperor Penguin (MM 12): Annie and Jack visit Antarctica for the first time in a search for happiness and meet some emperor penguins.
Fact Tracker: Penguins and Antarctica: Learn about penguins and other animals that live on Antarctica as well as the explorers who have been there.

Tundra: Balto of the Blue Dawn (MM 26): Learn about the Siberian husky hero, Balto, and how he helped save children during a diphtheria epidemic.
Fact Tracker: Dogsledding and Extreme Sports: Learn more about sled dogs, the Iditarod race and other extreme sports.

Mountains: Good Morning, Gorilla (MTH 26): Jack and Annie travel to the mountains of Africa and meet a group of gorillas.  They are frightened and amazed!
Fact Tracker: none at this time

Plains: Lions at Lunchtime (MTH 11): Annie and Jack travel to the savannas of Africa and meet wildebeests and lions.
Fact Tracker: Snow Leopards and Other Wildcats: Learn about tigers, lions, leopards, jaguars and more!

Plains: Rhinos at Recess (MTH 37): Join Jack and Annie back in Africa where they learn all about rhinos and the dangers of poaching.

Fact Tracker: none at this time

Dingoes at Dinnertime (MTH 20): Jack and Annie arrive in Australia just in time to save a kangaroo and a koala from a wildfire.
Fact Tracker: none at this time

Other Biome and Animal Resources