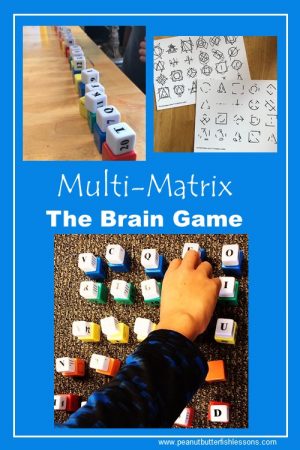 I was on Amazon recently looking at games to help my sons with their visual processing skills and ended up down a rabbit trail as I often do.  And I stumbled upon a ‘brain game’, developed by a developmental optometrist, that said it would help improve visual processing, sequential processing, pattern recognition, working memory, and sustained attention skills, all of which would improve academic skills such as spelling, reading and math.  And, get this….it was only $40ish!  What??  Anyone who has shelled out money for specialized therapies or programs such as CogMed or Brain Balance knows that $40ish is nothing.  Now I did not think it would do all that those therapies and programs do, but if it could help us gain just 5% of the skills those programs did, we would totally get a return on our investment.  So in the cart it went.  Oh the immediate gratification of Amazon!

So a few days later the Multi-Matrix Game arrived and I started to watch the online videos that train you how to use it.  There are just about 45 minutes of videos and they are well explained and easy to understand so don’t let the idea of ‘training’ make you think you are in over your head.  You’ve totally got this.  Plus, in the middle of this page you can download a ‘cheat sheet’ and a data collection sheet to help you.  Immediately, I started to use it with the child who just happened to be sitting next to me at the time, lucky him.  And oh my, I can totally see how powerful this can be.  The activity is fairly simple, but there are so many ways to vary it (at least 150) and thus the brain has to adapt to each variation.  And because it uses blocks and some are colored and they all have letters, numbers, and shapes printed on them, kids are naturally drawn to them. 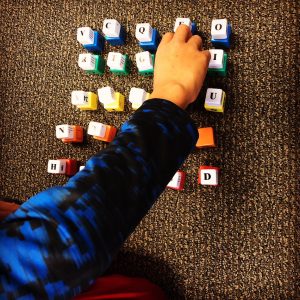 How To Use The Brain Game

The game consists of 25 small, white blocks and 25 large, colored blocks.  Each of the blocks have the letters A-X, the numbers 1-24, dot patterns for 1-24, and a shape on them.  You pick how many blocks and what symbol you will use and then set-up the blocks in one of a variety of displays, leaving one blank spot.  The ‘player’ then moves the blocks in order (1, 2, 3, or A, B, C) to the blank spot, When the shapes are used, the player uses a card to follow the order of the shapes to move.  The player is encouraged to switch hands on each move so that she is using both sides of her brain and crossing midline, which helps the two sides of the brain work together.

Click here to watch a short video explaining the activities.  You should work at a level where your child can achieve 80% accuracy so he feels successful.  I also typically work at a level where my guys can finish the task in 1-2 minutes.  If it is taking longer than that, then I might make it easier.  I emailed the company to see if they had target times of completion for the tasks and they said their time targets are specific to each child and that as you add brain loads to the tasks (see below) that it is okay for them to take longer as long as the child is still working at 80 percent or above accuracy. 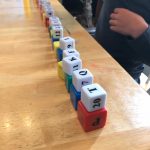 Blocks can be set up in a square grid, in a circle (which encourages children to use their periphery vision more), in a horizontal line (which targets the left-right scanning needed for reading), in a vertical line, or in a random order.  Once my children are doing well with one set-up, we then move on to the next one in this list.

If you need to make the tasks easier in the beginning, you can use less blocks and then slowly work up to the full 25 blocks.  You may also find certain symbols are easier for your child.  For example, for my youngest son, we are doing only 16-20 blocks at a time set up in a square or a horizontal line.  The numbers are the easiest for him and we also work on the letters and shapes, but typically we decrease the number of blocks for these two activities.

We use this game 3-5 times a week as part of our homeschool day.  During each session, we complete 2-3 tasks.  I keep data each session to determine when the boys are ready for the task to get a little bit harder so that we are continually stretching and developing their brains.  For example, below is a picture of some of the data for our 4th grader over the past week.  After looking at how he is doing with the task using number blocks, I have determined that we are going to move to the dot patterns over the next week to add a whole new challenge for him.  We will also start adding some motor brain loads as he is still refining his fine motor skills as well as language, cognitive, and math brain loads to improve working memory.  I have included the data collection sheet along with a ‘cheat sheet’ with a variety of brain loads that you can keep with it.  If you plan on giving the multi-matrix a try, fill out the form below  to download them. 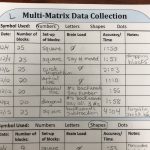 To purchase the Multi-Matrix Brain Game, click the picture below:

Once your child is doing well at completing the tasks above, you can start to add what the game calls ‘brain loads’ to make the brain work a little harder and develop new skills. There are probably an unlimited number of brain loads you could add, but below are a variety to get you started that are further explained in the training videos. I also listed many of these in the cheat sheet you can download at the bottom so don’t worry about taking notes.

Start by simply having the player name the symbol they are moving. It is amazing how this simple task slows my youngest child down and this is a good place for him to practice. But, if this is easy for your player, then have him name the color he is moving the block from and/or the color of the block he is moving it to. If you really want to target some language skills, you could use the letters and have the player name a word that starts with that letter as she moves it. You could also have the letters showing on the colored blocks and she could then name a word that rhymes with the first word, but starts with the letter on the colored block. For example, if she moved the ‘b’ to the ‘m’, she could say ‘bat’, ‘mat’. 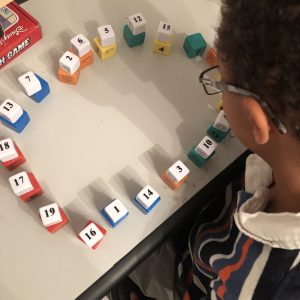 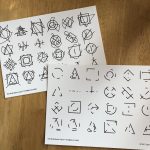 Adding a vestibular load to the game helps children gain voluntary control over their eye movements. You can use a spinning chair during the activity and spin your child once between each block move alternating the direction he spins each time. You could also use the shape set up and place the card telling in what order to move the shapes behind the child so he has to turn each time to see the card.

To challenge children, you can play distracting music or noise that they have to tune out while they work. We had some accidental background noise recently during a task and my oldest son took twice as long to complete the task as normal, which was interesting to see. Obviously, we need to work on tuning out background noise. You can also talk to the person or ask them questions he has to answer while continuing to complete the task. Or even call out names of other symbols that he has to tune out while focusing on what symbol it is that he needs to move next.

To make the task more challenging from a motor perspective, place the blocks close together so that the player will have to use more refined movements and/or put the big blocks on top of the small ones and move those. You can also have the player switch the fingers she uses each time to grasp the block so first thumb-forefinger, then thumb-middle finger, then thumb-ring finger, etc. The player could also add a movement to each move such as raise a foot or slap the table in between moves or while the opposite hand is moving the block.

To purchase the Multi-Matrix Brain Game, click the picture below:

If you have any questions about how we incorporate this into our school day, comment below or send me an email.

PrevPreviousWinter Math Activities for Kindergarten and 1st Grade
NextTurn Your Child’s Wishes Into Goals: A Goal Setting Guide for Your ChildrenNext