While we don’t usually think of Charles Dickens as  a children’s author, his short stories and the movie versions of his books can be a great introduction to his wonderful writing. He was famous during his lifetime and is now considered by some to be the greatest novelist of the Victorian era. His books are filled with imagery and descriptive language and often focus on the difficult lives of the poor.

This Charles Dickens Unit Study allows elementary age children to learn about Charles Dickens and can be used by itself or paired with the reading of one of his books or short stories.  It is based on Magic Tree House A Ghost Tale for Christmas Time and Who Was Charles Dickens?

Grab the books, sign-up to receive the FREE printable Charles Dickens Unit Study and then explore the other resources below! 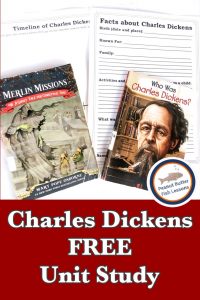 The Books about Charles Dickens

The Magic Tree House book sends Jack and Annie to London in 1843 as Charles Dickens is trying to write his famous A Christmas Carol.  He is struggling with the story and so Jack and Annie help him out.

Who Was Charles Dickens? tells about Dickens’ childhood challenges, many of the books he wrote, his family life and even his performances in theatres later in life. 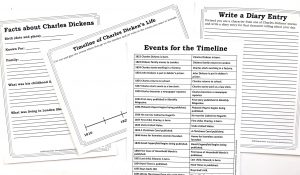 A math activity about British money.

A Venn diagram to compare two characters in any of Dickens’ books.

A Following Directions in London activity. 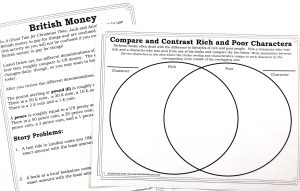 Charles Dickens was known to walk the streets of London for hours at a time.  Here is a little view into where he walked:

Dickens’ use of imagery and descriptive language along with his complex plots can make his writing hard for children to enjoy.  Here are the best stories and books for introducing your children to him.

The Magic Fishbone is the one book that Dickens wrote specifically for children.  It has 40 pages and is meant for children ages 6-10.  It contains a king, a princess, and a fairy, but addresses ‘money problems’ as so many of Dickens’ books do.

A Christmas Carol is a Christmas classic and makes for a wonderful read aloud for children (and adults) of all ages at Christmas.  To make this book even more enjoyable for your children, download the FREE unit study I created.

Stepping Stones: Oliver Twist is an adaptation of the original story meant for ages 6-9. (96 pages)

Classic Starts: Great Expectations is another adaptation of one of Dickens’ books meant for ages 7-9. (160 pages)

Usborne Illustrated Stories from Dickens contains adaptations of five of Dickens’ novels.  It contains beautiful illustrations and is 352 pages long.

Put on a Play

After reading one of Dickens’ books, act out a few scenes from the book!  Assigning and developing characters, learning lines and blocking movements are a great way for children to comprehend a story better.

Watch Movies Based Upon Dickens’ Stories

Several of Dickens’ stories have been made into movies, but not all are appropriate for children.  Here are the best ones for children.

Oliver! (1968) is the best Dickens’ movie for children as it is appropriate for ages 8 and up and is a musical about the orphan, Oliver.

A Christmas Carol (1951) There are several versions of this movie, but the most highly rated is the 1951 version starring Alastair Sim. It is appropriate for ages 8 and up.  (For a list of other versions, check out the A Christmas Carol FREE Unit Study.)

Great Expectations (2013) is listed for ages 10 and up on Common Sense Media.  The 1998 version is definitely NOT child friendly.

Other Resources For Your Charles Dickens Unit Study 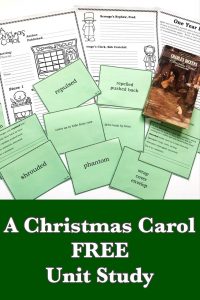 Have you studied Dickens in your homeschool?  Share below!