Harriet Tubman is one of the most awe-inspiring women in history.  From helping people escape on the Underground Railroad to leading scouting expeditions for the Union Army during the Civil War to speaking with the leaders of the women’s rights movement…this woman was in the middle of historic events and movements.  She is definitely someone you want to study in your homeschool during Black History Month, Women’s History Month or any other time of year!

Here is a unit study I put together to get you started! Grab the Who Was Harriet Tubman? book, sign-up to receive the FREE printable unit study and then explore the other resources below! 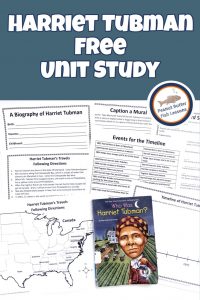 The Book about Harriet Tubman

If you are looking for a Harriet Tubman book for a younger child, this one from the Little People, Big Dreams series is a good one!

Writing prompt: Based upon the ‘Take My Hand’ mural at the Harriet Tubman Museum and Educational Center.

Word scramble: To review some of the vocabulary related to her experiences. 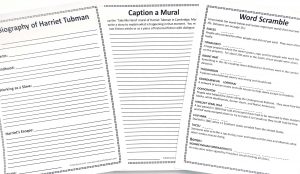 A timeline activity to chart Ms. Tubman’s life and work.

A following direction activity that teaches geography while sharing her travels as part of the Underground Railroad and the Civil War.

A Venn diagram to compare Ms. Tubman with someone else of your choosing. 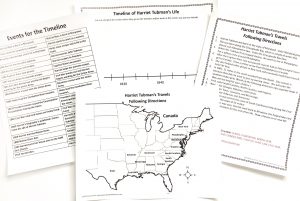 This video is an interesting look back at Harriet Tubman’s life while walking through the areas where she lived.

This video tells about Harriet Tubman with reenactment by actors accompanied by a narrator. (17 minutes)

Harriet Tubman is probably best known for her work as a conductor of the Underground Railroad where she helped over 300 slaves escape.  Look at this map of the routes and determine which one Ms. Tubman took based upon your reading.

Then check out this video for a brief history of the Underground Railroad.  (4 minutes)

To learn even more about the Underground Railroad:

It is thought quilts were used along the Underground Railroad to communicate different messages to the escaping slaves, although there are some differing opinions about this.  You can read more about this theory here.

You can make this into a fun activity be creating ‘quilts’ with graph paper and colored pencils or markers.  Make up your own code with different patterns!

Slaves, who were escaping, followed the North Star to make sure they were going in the correct direction.  The North Star is part of the Little Dipper constellation.  And it is easy to find in the Northern Hemisphere any time of the year.  A fun way to observe the stars in the sky is by downloading the Night Sky app to your phone.  Then just hold up the phone to what part of the sky you are looking at and it will tell you what you are seeing!

Slaves sang songs while they worked in the fields. They also sang songs that directed people to safe houses, conductors, and stationmasters along the Underground Railroad.  Here is a playlist of 47 ‘slave songs’.

Have you used any other resources to study Harriet Tubman?  Please share below!

Want to learn about some other amazing women?  Check out our Person of the Day Cards or our Julia Child or Helen Keller Unit Studies. 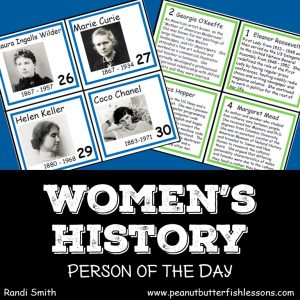 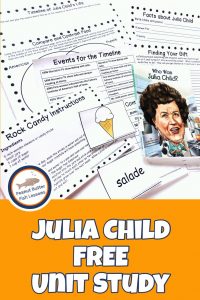 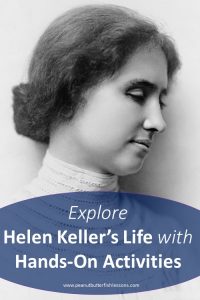 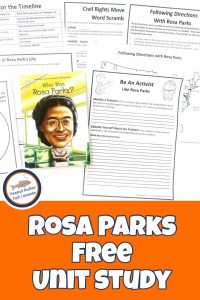