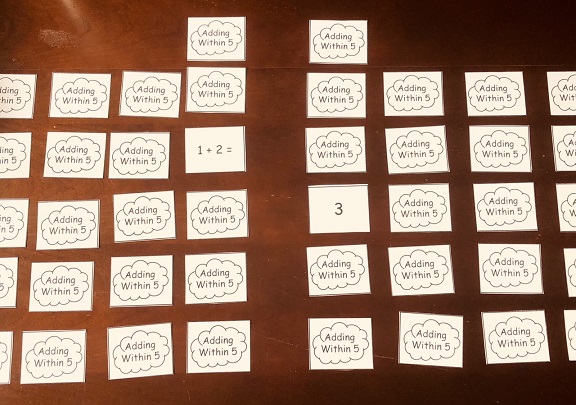 Despite using creative exploration and number sense routines to build a child’s sense of math, sometimes you still just need to practice math facts.  This, of course, can get boring, especially if just using flash cards to drill the facts.  Instead try one of these games to change things up and bring a little more fun to your fact review.

For most of these games, you will need a set of cards with equations and corresponding answers.  You can download a sample of our Ultimate Math Fact Flash Card Bundle at the bottom of the page.  Or you can purchase the full set here! 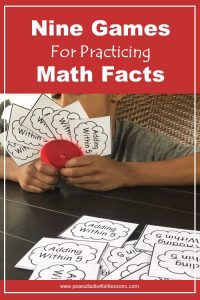 Choose about 10 facts and their answers, shuffle and lay cards face down in a grid pattern.  Players take turns turning over 2 cards, trying to find a matching pair.  If the player is unsuccessful, then play continues to the right.  If the player finds a match, he keeps the cards and goes again.

If your children struggle with remembering where cards are, you can place the cards into two separate columns or sets of columns  with all the equations on one side and all of the answers on the other side. This reduces the amount of cards they need to remember by half. 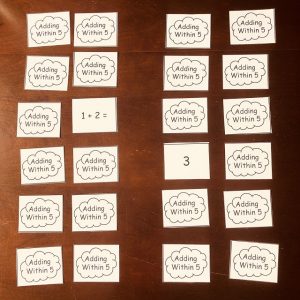 This is a great game if your child needs to get up and move around. Choose which equations you want to practice. You will only need the equation cards OR the answer cards for this game. You can play one of two ways.

For the second version, have the cards hidden more and when your child finds one, she brings it to you and tells you the answer. An alternative way to play is let her find the cards independently and place each fact in order based on the answer.  You can then check her work at the end.

Deal the equation and answer cards evenly so each player has 7 cards and then place the rest in the pond. Players take turns asking for a number or a fact and making a match.  If a player makes a match, they set it down next to them and  go again.  If they do not, the player they asked tells them to ‘go fish’ and they draw a card from the pond.  If this makes a  match, they may set it down next to them, but they may not take another turn.  Play continues until someone has discarded all of their cards and they are declared the winner.  Note: to speed the game up, you may choose just certain fact and answer pairs to play with, rather than the whole deck.

This game is usually played with two players. You will only need the equation cards for this game.  Deal them evenly between the players and decide whether the high card or the low card will win each hand.  Players will hold their cards face down in a stack and will lay down a fact face up.  The player with the winning fact gets to keep both cards.  If the facts equal the same amount, players have a ‘war’ by laying two of their cards face down near their played card and then a third card face up.  Players compare the last cards placed to see who has the winning card and that player takes all the cards on the table.  Play continues until one player has all the cards or until players are bored.  Then the player with the most cards wins.

This is a fast moving game based on Slap Jack.  Before starting the game, players pick a number that will be THE number to slap.  If working on making 10s, 10 would be a good number, but it can really be any number you want.  Then you will deal out about 40-50 fact cards evenly to all players. (Note: you may need extra copies of fact cards for this game so you have enough equations that equal THE number.)  Players will stack their cards face down in front of them and then take turns placing a card face up in the middle of the table.  If the fact makes THE number chosen before the game, the players should slap it.  Whoever slaps it first gets all of the cards in the middle of the table. A player wins when they have collected all of the cards. 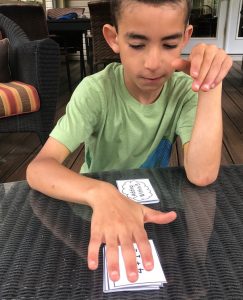 Before starting this game, decide on which number will be the ‘odd one out’ and remove any equations that equal that number from the the deck.  For example, if you are using a deck of addition facts and you decide 7 will be the ‘odd one out’, then remove all equations that equal 7 and leave only one 7 in the deck to deal.  Next, deal the remaining equations and answers to all players.  Players make pairs by matching equations and answers in their hand and laying them down on the table.  Once all pairs are made this way, players will fan out their cards and take turns taking a card from the person to their right in an attempt to make more pairs.  Play continues until one person is left with the ‘odd one out’ card.  In the above example, this would be the person left with the 7.  This player loses the game.

Printing out bingo boards with the answers and using calling cards to call out the facts is a great way to practice facts.  You will also need some kind of markers to cover the numbers.  Click the pictures below to download some FREE bingo boards in our Teachers Pay Teachers store. 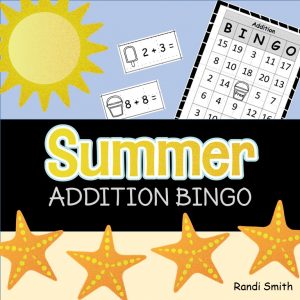 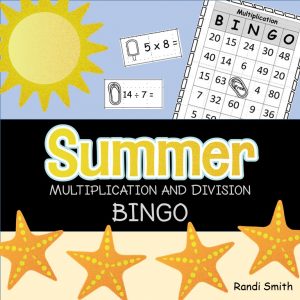 Use Math Fact Cards During Board Games

If you like to play board games, use the equation cards in place of a dice or spinner.  Players draw an equation, determine the answer, and then this is how many spaces they move in the board game. 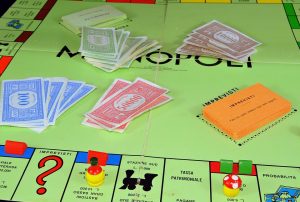 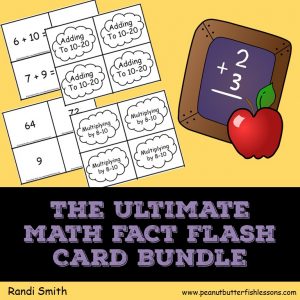 Other posts you will want to read: 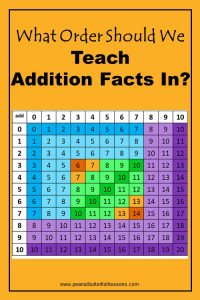 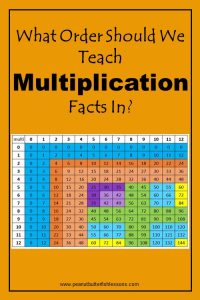 PrevPreviousWhat Order Should We Teach Multiplication Facts In?
NextWhen Your Child Says “I’m Bored”: A Printable List of ActivitiesNext

Open For One Week Only