This week in our 10 Weeks of Summer Reading series we have a FREE Unit Study about the great soccer player, Pelé.  You will learn all about his life, soccer, and the World Cup in Mexico City in 1970.

Grab one or both of the books, sign-up to receive the FREE printable unit study and then explore the other resources below! 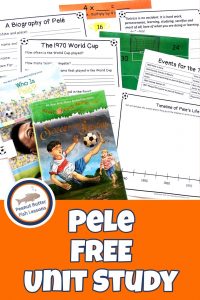 The Books about Pele

The Pelé unit study is based upon Magic Tree House Soccer on Sunday and/or Who is Pelé?  You may read one or both of these books.

Magic Tree House Soccer on Sunday is a fictional book that follows Jack and Annie to Mexico City to watch the 1970 World Cup Finals.  This book gives the reader a great feel of what it would have been like to be in Mexico City the day Pelé led his Brazilian team to win the World Cup.

Who is Pelé? is a non-fiction book that covers Pelé’s life from birth through his post playing career.  It includes information about soccer and his travels around the world while playing soccer.

Copy work of some of Pelé’s famous quotes.

A timeline activity to chart his life.

A compare and contrast activity to compare soccer with another sport. 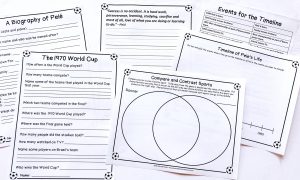 Country flags to color and wave as the fans did at the 1970 World Cup. 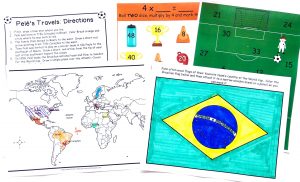 Here is a short interview with Pelé from five years ago when the World Cup was in Brazil.

Watch him play!  This first video shows a variety of highlights of Pelé’s play from the World Cup in 1970.

Soccer is a very popular sport and there are probably some leagues where you live that you could join!  If you want to learn some simple skills for soccer, like how to kick the ball, check out this video:

The 1970 World Cup, where Pelé became the first player to win three World Cups, was played in Mexico City.  Watch this video to see what Mexico City is like:

And here is a video about Sao Paulo in Pelé’s native Brazil.  His Santos FC soccer team practiced near Sao Paulo.

Let us know how you enjoyed this unit study and if came up with any of your own activities to go with it!