This week in our 10 Weeks of Summer Reading series we have a FREE Unit Study about shark attacks! Learn which sharks are most likely to attack humans, in which areas of the Unites States attacks are most likely to happen, the parts of a shark and more!  Practice graphing data, writing a creative story and following directions, too.

Grab one or both of the books, sign-up to receive the FREE printable unit study and then explore the other resources below! 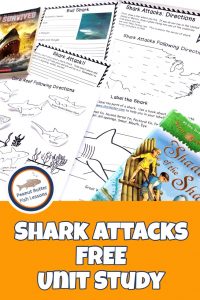 The Books about Shark Attacks

I Survived the Shark Attacks of 1916 is a historical fiction book that tells the story of a series of shark attacks in New Jersey in 1916.  This event was unique because before these attacks most people believed that sharks would not attack humans.   It is definitely a page turner and will keep your kids wanting to read.  Several facts about shark attacks are included at the end.

The unit study includes the following:

Notebooking pages to research the four sharks most likely to attack humans and one additional page to research any other sharks you would like.

Notebooking pages to use with the Magic Tree House book to note facts about the Ancient Mayans.

Graphing activity: use the data provided about fatal shark attacks in the United States since 2000 to create graphs and answer questions.

A mapping activity to follow directions to see where shark attacks are more common in the United States and Mexico. 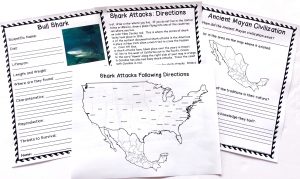 Comparing and contrasting activity to compare sharks with other marine animals.

Shark Anatomy: label the parts of a shark. 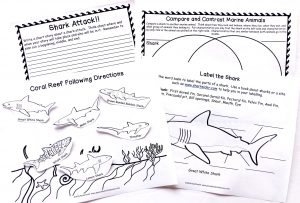 How to Avoid Shark Attacks

Super interesting video about what attracts sharks and what doesn’t.  A scientist does some interesting experiments to find out what is true and what is a myth.

In Magic Tree House Shadow of the Shark, Jack and Annie have a fun ride on the waves.  To learn a little more about waves, check out this video.  Then, can you play around with waves at home or at the pool to learn more?

When we draw something in nature such as an animal or plant, it leads us to slow down and look at the details of it.  Trying drawing some sharks using these tutorials to better see the differences between them.  And to have fun!

How To Draw A Great White Shark

How To Draw A Hammerhead Shark

This first aid book is a great one to keep in your home: