14 Types of Math Story Problems Your Child Should Know

Are you familiar with the different types of math story problems?

In Teaching Math With Story Problems, Not Word Problems, we talked about how powerful math story problems can be to help children learn and understand math and how it relates to the real world.

Cognitively Guided Instruction, which is a student-centered approach to teaching math, groups different word problems into types.  The different types for elementary aged children are described below.  There is also a FREE set of templates for each type of word problem you can download at the end.  These templates will allow you to create custom word problems for your child based on their personality and what they are learning in math. 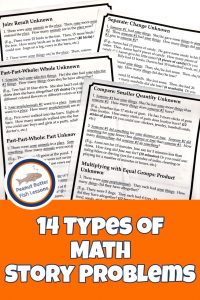 There are three different types of math story problems that join.  Notice, we are not saying addition here as we want children to understand the story as a whole and then solve it in a way that makes sense to them rather than thinking of the problem as an addition problem.

When children start thinking of problems as addition or subtraction, then they may just start grabbing numbers and doing that operation to them without really understanding the problem as a whole.

Within the joining problems, there are three types: Results Unknown, Change Unknown and Start Unknown.  Here are some examples: 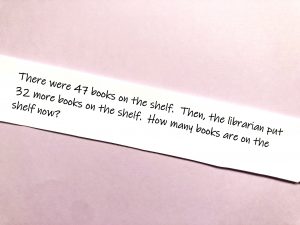 You can see for each of these types of problems there are two numbers being combined and then a total amount.  The only difference between the problem types is which piece of information is missing in each problem.

Remember when presenting the problems to be as hands off as possible in your guidance as described in our Teaching Math With Story Problems post.

There are three different types of math story problems that separate.  Notice again, we are not saying subtraction here as we want children to understand the story as a whole and then solve it in a way that makes sense to them rather than thinking of the problem as a subtraction problem.

Here are some examples:

Separate: Change Unknown: The family found 32 seashells.  Then, they lost some.  They had 18 seashells left.  How many seashells did they lose?

Separate: Start Unknown: Jason had some grapes.  He ate 18 grapes.  Then, he had 12 grapes left.  How many grapes did Jason have before he ate any? 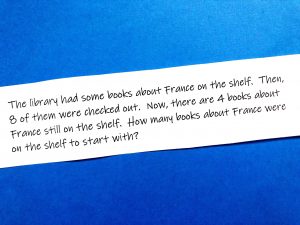 For each of these types of problems we have a starting amount and then some of that amount goes away.  The only difference with each problem is which pieces of information we are given for the problem.

Understanding which information in a story problem are parts and which is the whole is important to understanding the problem.  Putting the information into Part-Part-Whole Circles is a great way to visualize this.

The way these story problems are worded in the next two types make them great for working on this concept of part-part-whole.

Part-Part-Whole: Whole Unknown: Samuel had 8 pairs of jeans.  He also had 5 pairs exercise pants.  How many pairs of pants does he have altogether? 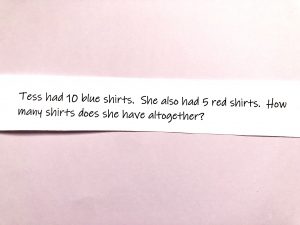 While usually I suggest not providing your children with much guidance on how to solve math story problems, for these two types it can be helpful to have a printed part-part-whole circle set they can draw on or place manipulatives on.  You could also draw one on the whiteboard before you present the problem. 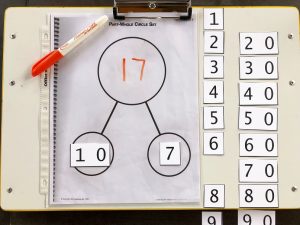 If your child wants to use another way to solve the problem, let them.  But, then afterward, you can help them fill in the part-part-whole circle set correctly.

These story problems have the child compare the pieces of information to determine the missing piece. They are definitely more challenging than the eight problem types already discussed. 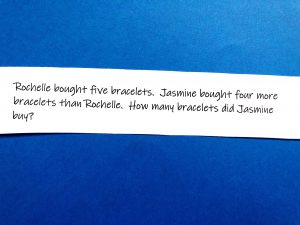 Multiplying with Equal Groups: Product Unknown: There were 8 children drawing pictures.  Each child drew 4 pictures.  How many pictures did they draw altogether? 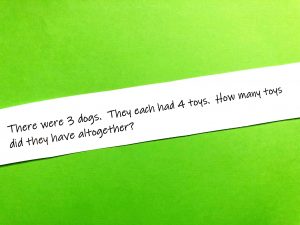 Dividing with Equal Groups: Group Size Unknown: Mrs. Johnson goes to the store and buys 512 small bags of chips for a large youth group.  She buys 32 boxes of chips.  If each box is the same size, how many bags of chips are in each box?

Dividing with Equal Groups: Number of Groups Unknown: The man gave 2 samples to each shopper.  He gave out 128 samples.  How many shoppers received samples?

So now that you know the different types of math story problems your children should practice with, download the templates below and start creating some!

Just pick which type of problem you want to practice and then fill in the blanks in one of the templates for that type.  You can make them easy with single digit numbers or more challenging if your child is working at a higher level.  And your child will love having the problems customized to his personality and interests! 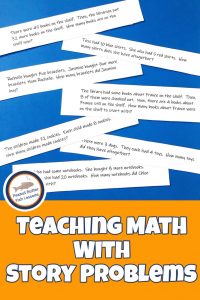 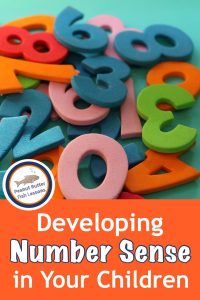 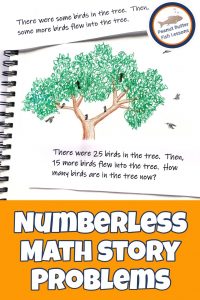 PrevPreviousHow Clouds Got Their Names
NextTeaching Math with Story Problems, Not Word ProblemsNext