Our family has loved the Who Was…..? series for a long time.  Earlier this year, I posted a list of the books in the series about US Presidents and First Ladies.  I was curious this week to see how many books there were featuring women that could be used to study women’s history.

Here is a list of the books, 54 in all, and the different topics and subjects they could be used to teach.  They are listed in chronological order by when the women lived.  At the bottom, you can download a FREE set of notebooking pages to accompany the books!  There are also links to unit studies to use with several of the books.

This list was last updated February of 2022.  (Note: click on the titles or pictures to learn more about the books.) 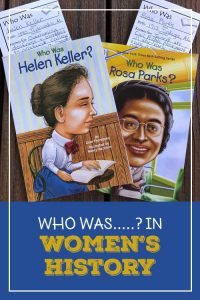 Learn more about her role in the Hundred Years’ War between France and England.

An interesting monarch in British History during the 1500s.

She led Russia through its ‘Golden Age’.

The first lady often referred to as America’s First Feminist.  This book could be read as part of a study of first ladies.

Another good choice for learning about the early United States.

Continue learning about European history with the start of the French Revolution in the late 1700s.

A British novelist whose books were a critique and commentary on the British gentry. Use as part of a study of authors.

Learn more about the Lewis and Clark Expedition or use as part of a Native American study.  Check out our Sacagawea FREE Unit Study!

A great addition to a Civil War study or women working toward the right to vote.

The author of Uncle Tom’s Cabin would be great to include in  a Civil War study.

Another interesting monarch to include in a study of 19th century British history.

If you are studying the women’s fight for the right to vote, you need this book.

A great look at the development of the profession of nursing and the Red Cross that would make another great addition to a Civil War study.

A fascinating woman to include in a Civil War study, especially focusing on the Underground Railroad.  Check out our Harriet Tubman FREE Unit Study.

This is a fun book that could be included in a study on entertainers over the course of history.  My boys especially loved this one!

A must read biography for any Girl Scouts out there!

The first of two biographies about investigative journalists.  This book could also be used as part of a study of Black history.

Another investigative journalist of the late 1800s and early 1900s.  She was especially known for exposing mental institutions.

Another book to include in a study about authors or as part of nature study and the need for conservation.

This would make a great part of a science study, especially chemistry.

This book could be included in a study of authors or settling the American West  It could be followed by reading some of the books she wrote.

Include in a study of first ladies, as she greatly changed the role of the First Lady.

Can be included in a history of aviation.  Check out our FREE Unit Study about Amelia Earhart that you can use with this book.

A good science read that would be great to read for Earth Day.

Wonderful for talking about poverty and learning more about India and sacrificial giving.

Great to include in a study of entertainment or arts.  Check out our Lucille Ball FREE Unit Study!

This would be fun to read and then try some of her recipes!  Check out our Julia Child FREE Unit Study.

Perfect for a study of the Civil Rights Movement.  Check out our Rosa Parks FREE Unit Study that accompanies this book!

Include this ballet dancer in a study of arts or of Native Americans.

Learn about this Cuban-American singer and then listen to some of her music!

Queen Elizabeth has been Queen for 70 years!  Learn about her life and all of the historic moments she has ruled through!

Include in a study of the Civil Rights Movement or Black history.

Another great one for a study of authors or poetry.  Listening to her read some of her poems would be a great addition.

Any study of the Holocaust or World War II would benefit from this book.

Another one to include in a study of first ladies.  She has always been my favorite!

The second woman to serve on the Supreme Court would be a great addition to studies of government and laws.  There is also a board book for Ruth Bader Ginsberg for the littlest of learners!

This book is a key part of a study of the women’s rights movement.

This is a great book to include in a science study of animals.

Another great author to study, especially for middle schoolers!

Include in a study of arts and entertainment or Black history.

Great for a music study. Read the book and listen to some of her songs.

Learn how this woman’s unique way of looking at the world has improved the treatment of animals!

Include this book in a study of first ladies or modern politics.

Learn about the first woman in space!  Great to include in a science study of astronomy and astronauts.

This book would be great as part of studying the judicial branch of the government.

A look at British royalty as well as serving others.

Include this book in a study of first ladies or modern politics.

Another author study that could be followed by reading the Harry Potter books or watching the movies.

Another one to include in a study of music, especially if studying Latin music.

A wonderful book for sports fans or to include in a Black history study.

A look at the influence of the Taliban, life in Pakistan, and the difficulties females face in receiving an education in some parts of the world.

What is the Women’s Rights Movement?

Finally, if you are not sure where to start, maybe this recent addition to the “Who Was…?” Series is just the place!

Three different styles of notebooking pages, including a set of notetaking booksmarks. 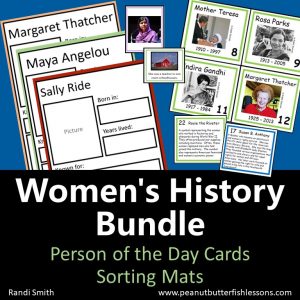