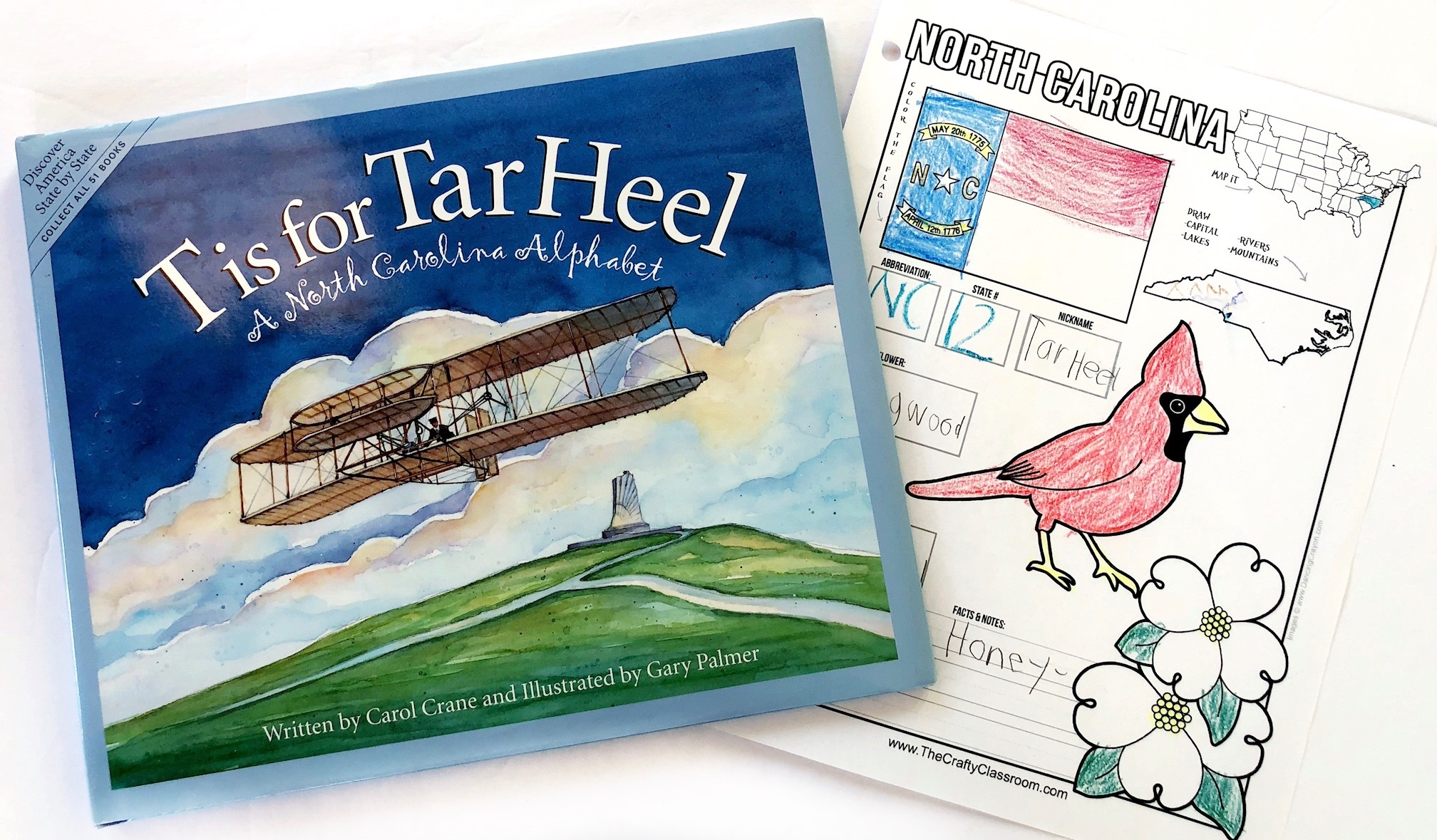 Fun and Simple Ways to Learn the 50 US States

The US States are a fun subject to study with children and there are lots of different ways to go about it.  Below, I share exactly how we set up our lessons as well as a variety of multi-sensory strategies we also mixed in for fun.  Near the end is a FREE printable you can download! 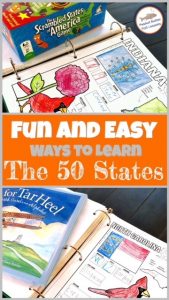 Learning US States in Preschool

I first introduced our boys to a map of the United States with a floor puzzle when they were preschoolers.  My oldest loves sports so I printed out the names and logos of the NFL teams onto cardstock and taped them on the appropriate states with painter’s tape and he was totally hooked.

This was the puzzle that we used:

We also enjoyed collecting the commemorative quarters from each state and placing them on a map of the United States.  It exposed the boys to the names and location of each state.  The picture on the back of the quarter for each state led us to research the story behind the picture.

Formal Learning of US States

Once the boys were in 1st or 2nd grade, we started more “formal lessons” about the US States three times a week.  We would pick one state per week to learn.  After finding it on the map, we would use the following routine.

First, we watched videos of each state’s song and other songs related to that state using State Songs of the 50 States Online Course from Music in our Homeschool.  My youngest son especially loved easing into each lesson this way.  The videos chosen for each song do a great job of highlighting some sites or history about the particular state. And the lessons provide all sorts of facts about the state like the state nickname, abbreviation, symbols and more.  You can even download the sheet music for the state songs if you would like. 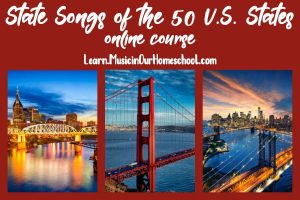 The second time we learned about the state each week, we pulled out our notebooking pages. (Although, after a few months my youngest son started pulling his out while he watched the videos above.) We loved these notebooking pages from The Crafty Classroom. 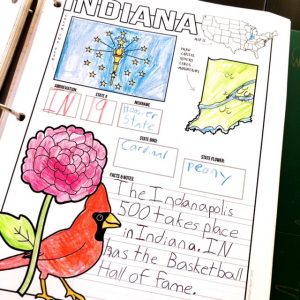 Books about the United States

Our local library has all sorts of books about the states, but our favorite series by far was the series of alphabet books like this one:

There is one for each of the states.  They contain great drawings of all sorts of facts about the state’s history, ecology, and people. There are in-depth explanations of at least 26 facts in each book.  We read aloud through some of the book over the second and third lessons each week.  Sometimes, I read everything in the book.  Sometimes, I just read the rhymes for each letter and the boys chose if they wanted to have the whole page read so they could learn more.

I liked to get the hard copy of these books so the boys could flip through them on their own, but they are also available electronically through Hoopla, which is a service our library supplies.  This was great for weeks I forgot to plan ahead and needed to pull the book up quickly!

If you have been around the blog for awhile, you know I love our sorting mats and so of course, I had to create some for the US States.  They are organized regionally in groups of five. Children match cards to each state that contain information like the state flower or animal, the state flag, the outline of the state, when it entered the union and more!

At the end of each week, I pulled out the state we just learned as well as any states we had already learned about in that region.  So some weeks there was just one mat with cards from a few other states to make them think harder.  Other weeks there were multiple state mats with the corresponding cards. 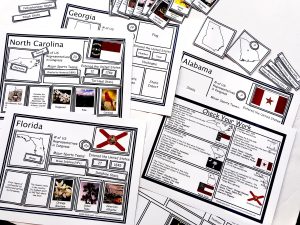 The sorting mats were a great way to assess how much the children learned without it feeling like a test!  They also allowed them to practice what they learned and use their critical thinking skills to figure out the information they hadn’t committed to memory, yet!

Listening to Learn US States

I have since added another great resource to our store…Listening to Learn US States.  There are two sets of directions to learn about each state.  One focuses on interesting places on a map of the state and the other focuses on symbols and other facts of the state with a notebooking style page.  To get an idea of what the directions are like, download this FREE set of directions about the United States as a whole. 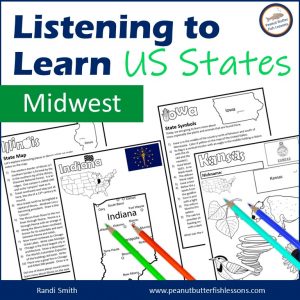 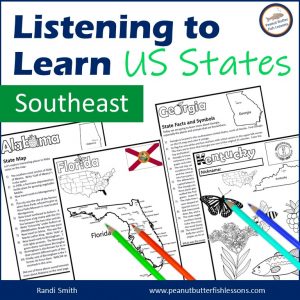 Less Formal Learning of US States

We also used some other fun activities to change lessons up.  Sometimes we took a week off from learning a state and used these activities instead.  Or we included them in a Fun Friday or a family game night.

Several years ago, I found a relief map of the United States at our local homeschool consignment store that we always pulled out when studying the states.  A few summers ago, I discovered a new way to use it!

Sarah Mackenzie shares the idea in her book, Teaching From Rest.  She suggests giving your child a blank map along with your educational map and have him fill in some of the information, such as five states and one or two bodies of water.

Then the next day, just give him the blank map and see how much he can fill in on his own from memory.  Once he has done this, give him the educational map again to fill in anything he has missed and add a few more pieces of information.

Continue in this manner so your child commits a few more pieces of the map to memory each day you work on it.  My older son loves this activity!  To him, it is a competition with himself to see how much he can commit to memory.

Games are always a fun way to review information and the Scrambled States of America is one we like to play.  The goal is to match a ‘riddle’ to one of your states, such as “Is north of Nebraska” or “Capital starts with S or T”.

I love Professor Noggin’s Trivia Games and would love to buy them all!  There is one for the United States, but I have not purchased it, yet.

For apps, Stack the States has been a fun one!

Ticket to Ride is a fun game that is played on a map of the United States.  It is a great for family game night.

A simple activity to assess what your children have learned is to give them a worksheet to match the state name to some of the state facts.  You can download these Matching US States and Flags Worksheets for FREE!  There are ten worksheets with each one containing five different states.  The states are organized into the same regions as the US Sorting Mats. 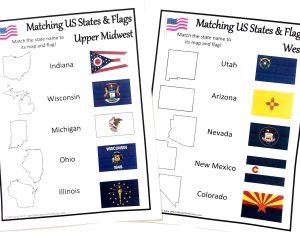 Do you have any other resources for studying US geography?  Let us know so we can share them with others!

To Learn More About the Sorting Mats: 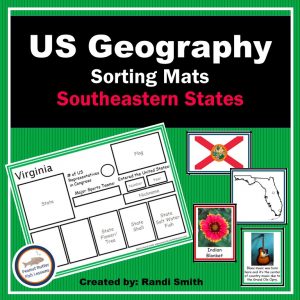 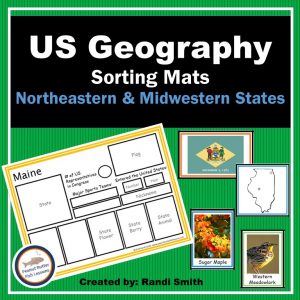 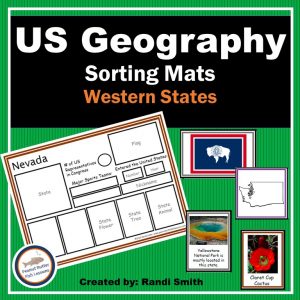 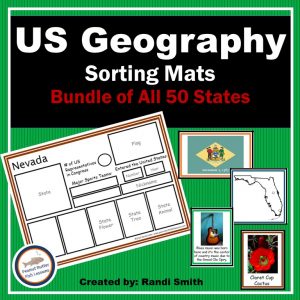