Author Studies in Your Homeschool

One way to make learning fun in your homeschool is to have a “study of the month”.  You might study an artist, a musician, a scientist, or an author each month.  Or anyone or anything else you can think of!

The post below lists several children’s authors that would be fun to include in Author of the Month studies along with books and videos.  There is a Who Was…biography for each author, which are great for 8-12 year olds.  Children can usually read one to two chapters a day and if we do them as a family read aloud, they usually take three days.  Some of the authors listed even have their own detailed unit studies that you can download! 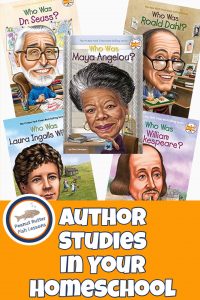 Thought of as the greatest playwright of all time, Shakespeare is someone all students learn about at some point.  So why not when children are young?!  This FREE unit study contains lots of resources for introducing all ages of children to Shakespeare:

You may think children need to be older before reading Jane Austen, but The Beautiful Cassandra is actually a great book to introduce her to younger children.  Austen wrote it around age 13 and it is only 72 pages long.  There is also a Who Was… biography for her and a book full of related projects!

The Brothers Grimm are known for their ‘grim’ fairytales, many of which have been ‘softened’ and turned into Disney movies.  Hansel and Gretel, Cinderella, Rapunzel, and Beauty and the Beast are a few of their best known.  Don’t you wonder what these brothers were really like?  Find out with their Who Was…biography and this short video.

Poe is another ‘grim’ author, but he also is a wonderful poet.  You can introduce him to your children with his Poetry for Young People book along with his Who Was… biography.  Check out this four minute video to learn more about him.

Stowe was an abolitionist whose best known book is Uncle Tom’s Cabin, which depicted the lives of enslaved African-American people. This book would be a good way to pull literature into a unit about the Civil War.  Learn more about Stowe with her Who Was… biography and this short video.

Dickens is known as the greatest novelist of the Victorian Era.  His stories and books serve as commentaries on life during that era.  He often wrote about the poor social conditions of that time.  Oliver Twist and A Christmas Carol are great stories to introduce children to Charles Dickens.  Here is a FREE unit study you can use to study him using A Christmas Carol as the piece of literature:

Whitman was best known for his poems, many of which were set around the Civil War.  One of his best known poems was O Captain! My Captain!, which he wrote about the death of President Lincoln.  While his poetry would be better to study in the high school years, his Who Was…biography is a great way to introduce him to younger students.

Verne is known for his classic stories, Journey to the Center of the Earth, 20,000 Leagues Under the Sea, and Around the World in Eighty Days.  If you are looking for your middle schooler to read some classics, these are a great place to start.  Include his Who Was…biography and this 8-minute video describing how Verne was able to ‘see into the future’ and you will have many great rabbit trails to explore!

Samuel Clemens was an American humorist who wrote under the pen name Mark Twain.  Tom Sawyer and Huckleberry Finn are good read alouds to introduce children to the Mississippi River area in the mid-1800s.  His Who Was…biography and this eight minute video would be good additions to a study about him.

Born Charles Lutwidge Dodgson, Carroll is known for writing Alice’s Adventures in Wonderland and Through the Looking-Glass.  Read his Who Was…biography to learn more about the man who created these books that continue to influence pop culture today.  Then check out these ideas for throwing your own Mad Hatter Tea Party!

Beatrix Potter’s books are full of fun characters and great to tie into nature studies.  She herself was a natural scientist and a conservationist.  You can learn more about her with her Who Was… biography and this five minute video.

Laura Ingalls Wilder is a favorite author for many and her books are perfect for children.  Readers learn about westward expansion and Laura’s life through her books.  But to learn even more about her, especially her adult life, you can read her Who Was… biography and watch this video.  Also, check out this list of related activities and printables.

Milne was a playwright before becoming famous for his series of Winnie-the Pooh stories.  Learn how his time playing in the woods with his son inspired his writing when you read his Who Was…biography.  Kids will also enjoy this short video biography.

Tolkien is well known for his Lord of the Rings trilogy as well as The Hobbit.  If these will be on your middle school reading list, then learn more about him with his Who Was…biography and this short video.

Hemmingway is regarded to be a classic American novelist and is known for his books such as For Whom the Bell Tolls and The Old Man and the Sea.  The Old Man and the Sea is a relatively short book and a good way to introduce him to middle schoolers.  You can learn more about him with his Who Was…biography and this short video.

White often wrote for magazines, but is best known for his children’s books, Charlotte’s Web, Stuart Little and Trumpet of the Swan.  Learn what inspired him in his Who Was…biography or the artfully illustrated biography, Some Writer!

Ted Geisel wrote some of our most beloved children’s books under the pen name Dr. Seuss.  Since they were probably some of your children’s first books, he can make a great first author to study.  Learn more about Mr. Geisel with his Who Was… biography and this video.  There are many related activities you can do with these books and these STEM projects are a great place to start.  Check out our FREE Unit Study to learn all about him!

Your children are probably familiar with Dahl’s stories such as Charlie and the Chocolate Factory, James and the Giant Peach and BFG.  His strange characters and interesting adventures makes one wonder what Roald Dahl himself was like!  Here is a FREE Unit Study to learn all about him: 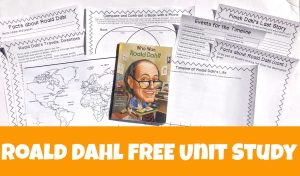 The creator of Peanuts would be a fun and different ‘author’ to include in your studies! Read one of the many collections of his cartoons, check out his Who Was…biography, and learn how to draw Snoopy and Woodstock.

Stan Lee is one of the best known comic book writers of all time and can be super fun to study.  Think of all the movie studies you can incorporate!  Here is a FREE Unit Study to learn all about him:

You know this author as the writer of Where the Wild Things Are.  Learn more about why he was revolutionary in the children’s book genre from his Who Was…biography and this short video.

Maya Angelou was an amazing poet and memoirist.  While much of her well known work is appropriate for adults, she wrote poetry for children as well.  Some to start with are Life Doesn’t Frighten Me, Kofi and His Magic, or My Painted House, My Friendly Chicken and Me.  Your children can learn more about her life through her Who Was… biography and this short video. Listen to her read her poem, Still I Rise.

Blume was one of the first young adult (YA) authors and wrote many books that helped children transition through adolescence.  Some of her popular novels are Tales of a Fourth Grade Nothing, Blubber, and Are You There God? It’s Me, Margaret.  Learn all about Ms. Blume with her Who Is…biography and this interview.

Known as the “Stephen King of children’s literature”, Stine wrote the Fear Street and Goosebumps series among others.  Learn about what inspires him as an author with his Who Is…biography and this short video.

JK Rowling is of course known for her best selling Harry Potter series.  You can learn more about her through her Who Is… biography and this four minute video. If your children are Harry Potter Fans, they will want to check  out the Wizarding World website.

Kinney is known best for his Diary of a Wimpy Kid series.  Learn about the writing challenges he faced and his later successes in his Who Is…biography.  And watch this news story about him.

As an author, Yousafzai is best known for her memoir, I Am Malala, which is about her work for women’s right to an education and how she was shot by the Taliban for it.  She also has written a picture book for younger children.  You can learn more about her life before she wrote her book and since in her Who Is…biography and through this short video.

Which author study have you done before or which one are you looking forward to studying?  Who else would you add?  There are so many more!