Black History month celebrates many inspiring people from many different time periods and backgrounds.  And what better way to commemorate it than to read books about these inspiring people!

Our family loves the Who Was ® series of books and I have posted before about some of the books we have enjoyed. (Click here for our other lists: Inventors, Women’s History, US Presidents.)  They are great biographies with lots of interesting facts presented in an engaging narrative.  Plus, they include lots of drawings.

Here, I organized a list of all of their books to date that would be appropriate for black history month or to read throughout the year.  There are also two books in their What Was… series that are perfect for this study.  In total, there are 25 books!  At the bottom, there are FREE printable notebooking pages and notetaking bookmarks you can download!  Use them to take notes while reading any of the Who Was… books on this list. 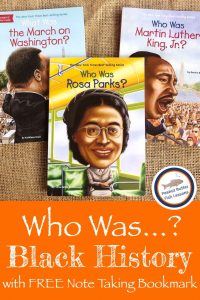 An escaped slave who advocated against slavery and for women’s rights.

An escaped slave who became the father of the Civil Rights Movement.

Another escaped slave who helped many others escape.  She led a very interesting life, including spying for the Union Army! Check out our Harriet Tubman FREE Unit Study, which accompanies this book!

What Was the Underground Railroad?

This would be great to read along with Who Was…Harriet Tubman? and gives an in-depth look at how slaves escaped to the North in the 1800s.

An investigative journalist and early leader in the civil rights movement.

A former slave who founded the Tusksegee Institute to provide a formal education to black people.

A former slave who became a professor and botanist, developing new ways to grow crops.  This would make a great addition to a unit study on botany.

A band leader and composer who was large part of the Harlem Renaissance.

A great jazz musician who had a troubled childhood.  Check out our FREE unit study about Louis Armstrong, jazz music and New Orleans!

An Olympic medalist for track and field that pushed through racial barriers at a worldwide level.

The first black president of South Africa who lived a long and interesting life.

The first black major baseball league player.  Read about what he faced in this role and how he responded.

Not only was she Martin Luther King, Jr.s’ wife, but she was a Civil Rights leader herself as well.

A wonderful poet and author.  After finishing this book, you could read some of her works!  Bonus: Listen to her read one of her works or give a speech or interview as she had an amazing voice.

A Civil Rights leader who gave his life to the movement.  (For a list of other great books about him, click here.)

A great book to read with Who Was Martin Luther King, Jr.?  It covers the reason for the march, how it unfolded and the influential people involved. Black and white photos are included.

A group of African-American military pilots that fought in World War II.  This book would be great as part of a study of World War II.

One of the greatest footballers (soccer players) of all time.  Check out our FREE Pele Unit Study here and learn all about his life.

A world class boxer known as “The Greatest” and a political activist.

A great musical artist and the first woman inducted into the Rock and Roll Hall of Fame.

A Jamaican reggae musician who influenced the world.

A singer-songwriter who started his professional career as a child.  Great alone or as part of a study of music.

“Queen of All Media” best known for her daytime talk show that ran for 25 years.

Another amazing entertainer who started his career as a child!

Our 44th president.  This book was published during his first year in office and therefore focuses on his life leading up to that year.

A basketball legend who changed the business side of being a professional athlete. (Just released!)

Our former first lady.  This book covers her life from childhood through her first term in the White House.

What Was… Books About Black History

What Was the Underground Railroad?

What Was the Harlem Renaissance?

What Were the Negro Leagues?

What Is the Civil Rights Movement?

These FREE printable bookmarks can be used to take notes while reading any of the Who Was…books in this list to learn about black history. 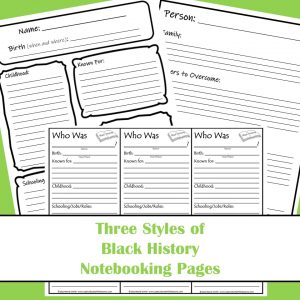 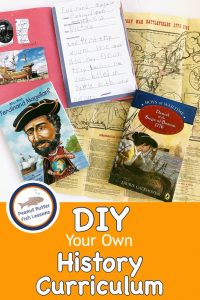 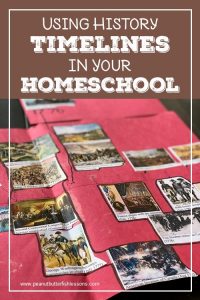